Hear My Story: Breast Cancer Twice, and My Only Choice Was Health Care in France 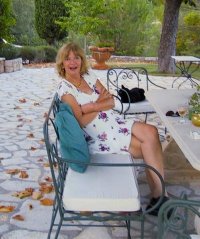 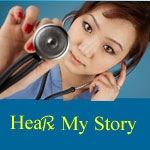 America is no place to be old or sick.

I am an American health insurance exile. While living in New York in 1978, I got breast cancer and had a mastectomy. Blue Cross/Blue Shield summarily refused me coverage for my care and indeed cancelled my excellent paid-up policy without explanation.

I fought them. And I lost. Hospital bills, surgeons, anesthesiologists, endless tests and chemo absorbed all my savings. I had to sell my house and all my belongings. Then, bald, broke and severely weakened by a year of heavy chemotherapy, I gathered up my kids and took them to live in France where there is a national health insurance plan. I was lucky. My books were selling well in French so my publisher has been paying his share of my policy all along. I paid up my share; so I and my two daughters once again had full coverage health insurance.

I had gone to live in Paris as a very young woman. There, I had given birth to two American daughters. Their dad was American. He had moved back to America. We stayed on in Paris. In 1975, after I sold my first book to a New York publisher, I moved myself and the girls (11 and 12 yrs old) back to the States. I wanted them to have a chance at being American. They loved the States. School in America was more fun than in France. It was easier and their classmates were friendly. Besides, in America there was more ice cream.

In June of 1978, we moved to Sag Harbor, Long Island. I had bought a house there with the advance on a new book. Each of us girls had her own bedroom. We were in clover, romping along that summer, eating too much corn on the cob and playing at hamburger cookouts.

I thought there must be some mistake.

Why in the name of good common sense would an insurance company cancel someone’s paid-up policy just after they had had a mastectomy and were on the brink of a year’s chemotherapy? I mean, why bother to buy insurance if it cancels you when you get sick?

It took me months to find out the answer. Blue Cross/Blue Shield of New York would neither talk to me on the telephone nor would they answer my letters. I had to get a lawyer.

Here is what the lawyer was able to find out. Blue Cross/Blue Shield claimed there was information in my hospital record which indicated that I had suffered breast cancer 3 years earlier. Hence, their excuse was that I had a pre-existing condition. In effect, they claimed I  had lied about my health history when I applied for the insurance two years before.

My lawyer friend (a saint!) told them that if I had had cancer 3 years before and had not been treated, I would very likely not have been alive to lie on any insurance applications.
But they didn’t want to hear what my lawyer had to say. In those days, (no joke) a patient was not allowed to obtain his or her hospital record. Only a lawyer (or the person’s doctor) was allowed to have copies. So my lawyer friend went directly to the hospital to fetch a copy of the record in question.

It was true. In the record, was a scribbly entry in scrawly handwriting that said “Ca  3 yrs”  or something very close to that. (I have all the files here somewhere) This utterly false entry was written by a very sleepy young man in a white coat. His name was/is Ralph Pennino.

Ralph was handsome and swaggery young. He had come around with a clipboard and flapping white coat when I was first in the hospital bed the day before my operation. His job was to take my history. Ralph asked me a slew of questions. Did I have a history of heart disease or Diabetes? What childhood illnesses and surgical interventions had I suffered? etc. The normal questions.

I answered all of them honestly.

He then asked if there was cancer in my family. I told him that my sister had died of breast cancer in 1976. He wrote down something. The boy appeared to be asleep on his feet. I figured he was one of those overworked 24 hour-on-call intern people. But, it turns out that this dashing Ralph Pennino character was not a doctor. Ralph Pennino was just a cute medical student on loan from Georgetown Medical School to New York Hospital for a summer’s apprenticeship in ruining peoples’ lives.

When I found out that the error was Ralph Pennino’s fault, I called Georgetown Medical School. The operator very kindly gave me Ralph’s home telephone number. I was hopeful. It seemed simple. Ralph could just say he made a booboo on my record and Blue Cross would relent. So I called him.

“Hi Ralph.” said I. “This is Suzanne White. Remember me? New York Hospital last July?” (It was nearly October by this time)

“Oh yes, Suzanne. I do recall. How are you?” said young Ralph.

“Terrible. You wrote something in my hospital record that Blue Cross used to cancel my insurance policy.”

“Really? That’s not possible.” He said.

“It’s not only possible, Ralph.  You did it. You even signed the form.” I said.

“It’s not enough to be sorry, Ralph. You have to write a letter to Blue Cross and cc: me and New York Hospital on that letter. And you have to do it right away. I am on the verge of starting one year of chemotherapy. I need my insurance back. I haven’t got the money to pay all these bills that the hospital is sending me for everything from the operations to anesthetists to x-rays and blood tests and surgeons and medicines. I just don’t have the money,” I explained.

“What do you want me to say? “asked young Ralph.

“Just  say that you made a mistake. Tell them that I did not have cancer before. That, as far as you know,  I  had never had cancer. Explain that you wrote down something that wasn’t true by mistake.”

“Oh I couldn’t do that.” Ralph told me. “It would ruin my medical career.”

“Ralph,” I said, as calmly as I could manage. “if you don’t write that letter to Blue Cross, you will be ruining my life and my children’s lives. I will lose my house and my career as an author will be over as well.”

“I am sorry Suzanne. I just can’t do that.” Ralph asserted and rang off.

I went to my very senior surgeon from Sloan-Kettering/New York Hospital and appealed to him to put pressure on young Ralph Pennino and make him admit his mistake.

And what did my surgeon say?  “The boy can’t write a letter like that, admitting a mistake on someone’s hospital record. It would ruin his career.”

I should have shot the sheriff right then and there and promptly driven down to Washington and wrung the young Deputy’s neck. (Thank you Eric Clapton)  But by the time I was ready to do that, I was retching up my innards after my first chemotherapy treatment–for which, by the way, I didn’t  have the money to pay.

Did my children’s rich father volunteer to help us? No. But that’s another part of the story and it’s too long to go into here.

Why I started this at all is to tell you that when I was so ill and had lost my house and everything else I owned (except the kids who were scared to death and still wonderfully helpful and kind to me during that awful time.) and had, by some miracle, completed the course of chemotherapy without dying, French friends sent me 3 one way tickets on Air France and told me to “Come home” to Paris.

We came back to Paris where we had always lived until 1975 and little by little, painfully, one step at a time, we got back on our collective feet. It took years. But we did it–together.

Now let’s go back to 1980. In France, a publisher is considered an employer and must pay a % of his author’s income to the French National Health Insurance Company. Therefore, in 1980, I was an author whose publisher paid a small share of my royalties as a health care premium to the national health insurance company. I was obliged to pay in a % as well. I therefore qualified for the French National Health care system for myself and the kids.

Through friends, I had found excellent doctors in Paris and was watched carefully by all of them. In 1981, they discovered I had cancer in the other breast. I was operated on for my second mastectomy at the Curie Institute in Paris. Everything (including operation, hospital, anesthesia, train fare, babysitters and a month in a plush rest facility in the south of France where I swam laps daily to recover the use of my arm) was 100% covered by the French Health insurance plan. Where the American insurance company had so ruthlessly tried to kill me, the French insurance company had graciously saved my life.

The French Universal Single Payer Health Care Company is why I am alive today. That same universal care insurance company enabled me this very summer to spend my precious leisure hours undergoing all those scans and sonograms and blood tests and electro cardiograms and Dopplers and colonoscopies and endoscopies etc.

Thank you France. Because of your fabulous, generous, caring, loving, competent, humane and efficient Health Care System, thirty years after having had breast cancer, I am alive to write this all down.

Wouldn’t it be comforting if everyone in America, rich and poor alike, could be unafraid to get sick or have a handicapped child or a serious paralyzing accident?

Wouldn’t it be gorgeous to not have to take your feverish baby out into the cold and then wait hours in an emergency room full of sick people to get some care?

In France, the doctors make house calls. In America, if you can’t pay the doctor, his bill collectors come and take your house away.

Americans, do yourselves a favor. Insist on Single Payer National Health Care. Find out what that means and assist your brave new President in helping to make it happen.

P.S.  We do not have higher taxes in France because of universal health care. Our Health insurance has nothing to do with our taxes. Taxes are paid on earned income just as they are everywhere else. The French health system is nothing more or less than a huge insurance company run by the govt. Most everything medical is covered at least 80%. If you don’t want to co-pay the 20%, you can buy an inexpensive private supplementary policy from a private insurance company. They will make up the difference. If you have one of 18 or 20 very serious or chronic illnesses, everything is covered 100% until you are well again. You pay premiums according to your income. Your employer pays in too. And if you are so rich that you don’t want to pay a % of your income to the government company, you are free to buy a private health insurance policy of your own.

If you have questions about how our health care system works in France, you can always reach me via my website, SuzanneWhite.com.

P.P.S. Many people who read this article which appeared first on my web site and on Facebook wrote to me wanting to know where Ralph Pennino is today. Dr. Pennino is a well-respected plastic surgeon in Rochester, NY. Face lifts anyone?