Been a while since I last wrote with advice about “basketball diplomacy.” August, 2008, as a matter of fact.

As a sports fan in general and a basketball fan and player in particular, a certain young Chinese (Taiwanese) American man can’t have escaped your attention. I mean, who hasn’t experienced the #Linsanity by now? (Just in case folks have been living under a rock, meet Mr. Jeremy Lin, remarkable point guard and scoring machine for the NY Knicks.)

Coinciding with all this excitement, Xi Jinping, the successor to the current head of China’s ruling party, is visiting the White House, and even calling for “deep U.S.-China ties.” 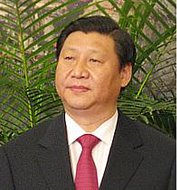 But here’s the thing — people in China are NUTS for basketball. Have been ever since the 1920s and 1930s. My own retired dad, an immigrant and naturalized American citizen from China who still likes to go back to his country of birth for extended visits, has pictures of himself ballin’ in the 1950s. To this day,  he loves him some basketball.

(Here’s yet *another* Chinese politician, Vice Premier Wang Qishan, hanging with POTUS while waiting for a court to open up. Also a baller, clearly: check the form.)

And now Americans already NUTS for basketball are even nuttier for a Chinese/Taiwanese American star basketball player.

So I think you could do one very incredible thing that would unite all colors, races, nations, religions, and creeds under the sun in the kinship of the hoop: INVITE JEREMY LIN TO COME SHOOT HOOPS WITH YOU IN THE WHITE HOUSE. And yo, Xi Jinping and you can go two-on-one against that young Chinese American dude that many are calling the Bruce Lee of basketball. ( 😮 What’s a little Taiwanese nationalism or wrestling over the strait,or trouble in Tibet between friends? Yikes!!)

You will have the undying love of the Chinese people. You will have the unswerving loyalty of probably 99% of Asian Pacific American voters come 2012. And you’ll bring together non-Asian fans of the game in America and around the world who love a hard-working team-player and a good sport.

Mr. President, think of the heads asploding with joy. Do it.

You won’t be able to keep “Obamalin-Bidenlin 2012 #17” jerseys in stock at the official online campaign store.

Cynematic is not really a sports fan, but she likes a good underdog story and hopes the Jeremy Lin – Tim Tebow comparisons are overblown.