Jeb Bush Can Lead Himself Back to Retirement 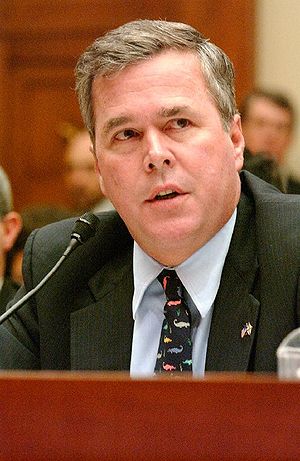 Jeb Bush has published a new book on Immigration. If you’ve heard about it at all, it’s probably from stories that say he flip-flopped on his position, or speculation that the book indicates he’s running for President in 2016. (Another President Bush? Heaven help us.)

Bush has been making the usual book tour rounds to the usual suspects. I confess that I only half-listened to his full interview on NPR’s Morning Edition while I was getting ready to drive my daughter to school on Tuesday. What I heard went something like this:

He didn’t say anything I would not expect to hear from the next anointed conservative Chosen One. And that’s what you would think if all you did was read the account on the NPR website.

But then the interview ventured into territory that had little to do with immigration. Like the ongoing fight over the budget deficit and the crisis du jour, the sequester:

No, I think it’s correct to say that we have a spending problem that ‘s going to overwhelm all the priorities that people in public life would want. So advocating spending restraint is important. But I think it also ought to be combined with an advocacy of reform of our entitlement system…

… and engage the President to get him to be public about what his plan is. The only plan that’s been out there for a while is the Ryan plan and then the Ryan-Wyden plan but the President needs to lead in this regard, and I hope he does.

And now, I’m starting to get mad.

If the President is for increasing the eligibility rate, which I think makes sense, given the changing demographic nature of our country, if he’s for whatever substantive changes he’s for, he should be public about it. This is not a radical idea. This is how it has been done in American history. Presidents have led and they’ve used all the skills at their disposal to convince and persuade. My brother did it. Bill Clinton did it. My dad did it. Ronald Reagan did it. Why is it such a hard thing for us now to expect our Presidents to lead?

Jeb Bush has a right to his opinion on policy. I don’t agree with it, but as long as he wants to talk factually about the issues and the solutions he proposes, I’m fine. That’s political discourse, and it’s healthy. But the minute he started spouting this week’s Republican party talking points, I wanted to SCREAM.

Let’s begin with the lie that the President is a big spender and doesn’t have a plan to tackle the deficit. As Greg Sargent points out this week in the Washington Post:

It’s a clever message, but it runs into a big problem: The facts. Democrats, including President Obama, have consistently acted to cut the deficit and reduce spending. As part of the 2011 Budget Control Act, Democrats agreed to over $1 trillion in spending cuts over the next ten years. This was followed by $600 billion in new revenue as a result of the “fiscal cliff” deal, and then another $700 billion in interest savings. Altogether — excluding the sequester — Congress and the White House have passed nearly $3 trillion in deficit reduction. When you include sequestration — which amounts to $1 trillion in across-the-board cuts — that jumps to almost $4 trillion worth of deficit reduction. That comes close to the full amount of deficit reduction pushed by debt hawks like Alan Simpson and Erksine Bowles.

Another big fat GOP lie is that the sequester was the President’s idea. How bad is our short term memory that no one seems to remember the debt ceiling debacle that came about because the GOP-led House was holding the nation’s credit rating hostage in exchange for spending cuts without corresponding revenues? I dare you to try to read the material on the link without wanting to pull out your hair. The across-the-board sequester was supposed to be a hammer that would force both sides to give a little. Unfortunately, the GOP leadership thinks “compromise” means “give us everything WE want.” Their refusal to give on the revenue side is what has forced this sequester.

While we’re at it: The George W. Bush administration’s unnecessary tax cuts and while conducting TWO wars is the reason we have these massive deficits in the first place. The economy was doing fine with the Bill Clinton tax structure, and Clinton left the Presidency with a budget surplus. And after swelling in the wake of the 2008 financial meltdown (which began during the Bush Administration), the budget deficit is rapidly decreasing: falling faster over the last three years than it has since the end of World War II. Yet, the GOP lies about that, too – to the point that most Americans have no idea that we’re getting our economy under control. That is, if Congress doesn’t take more actions that mess it back up. Like sequestration.

But the most galling assertion is the one that President Obama isn’t a leader; that his failure to persuade Republicans to meet him half-way is all his fault. When Jeb Bush invokes the names of Reagan, Clinton and his family members, he neglects to mention that each of them dealt with a Congress where the majority of Senators and Representatives managed to put country ahead of politics at least some of the time. No President has ever faced the organized intransigence that greeted President Obama on his first day in office.

The Jeb Bush interview concluded with the question on everyone’s mind: Is he running for President in 2016. Bush answered “no” — but everyone knows that’s a lie.

Why aren’t they questioning the talking points, too?