Lean In, Chin Up and Tune Out 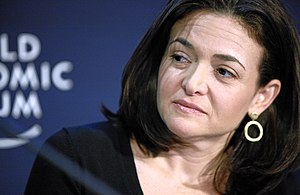 MOMocrats is proud to be a part of the Lean In blog carnival at MomsRising.org, which will be featured on tomorrow’s MOMocrats MOMochat podcast.

I’ve been thinking a lot about women and our place in society the last couple of weeks. This is appropriate, as it is Women’s History Month and was kicked off at PBS with “Makers,” a three-hour documentary on the “second-wave” women’s movement.I sat down to watch it last weekend and was enthralled. I am old enough to remember all the events portrayed in the film, but was too young at the time to grasp the significance of the earlier events. And while I happily recognize that we’ve “come a long way,” I am terribly sad and frustrated that we’re not even close to achieving true equality.

If we were truly equal, the fuss over Marissa Mayers’ no-telecommuting directive at Yahoo! would have been focused on the protests of ALL affected employees, instead of just the mothers. And Sheryl Sandberg would not have needed to advise young women to “Lean In” to get ahead in the workplace.

The website for Sandberg’s new Lean In community states that they are “committed to offering women the ongoing inspiration and support to help them achieve their goals” and that “if we talk openly about the challenges women face and work together, we can change the trajectory of women and create a better world for everyone.”

I see nothing wrong with that and I applaud Sandberg for whipping up support to solve a problem. But I also understand why there’s been so much criticism of the effort as one that isn’t going to help the majority of women in the workforce — because most of us are not or will ever be on the executive track. We just need to support our families.

The way I see it, our unequal state in society is too big a problem to be tackled by just one initiative. The glass ceiling is real, as is the perception that some successful women don’t do much to help the younger women who follow. Sandberg’s book and support group may help put that issue to rest.

But that is just one tiny part of a huge problem that is somewhat invisible, even to women ourselves — until we give birth to our first child. That’s when we discover how widely our national policies veer away from our political rhetoric. It seems like the more lawmakers talk about “family values,” the less likely they are to vote for policies that support the families they supposedly care about. Women need support climbing the corporate ladder. Women and families also need equal pay, options for flexible and/or part time work, affordable universal daycare, universal healthcare, paid parental leave, and a path back into the workforce once time has been taken to raise a family.

Does this sound like a fantasy? Only in America. Many of these ideas are actual policy in other industrialized nations.

I had hoped to convince my supervisors to allow me to officially work from home a couple of days per week after my daughter was born, but that was not to be. After three frustrating years, I ended up walking away from that job and became a full-time, stay at home mom. At the time, I thought I would be able to find some part time work that made sense, but soon discovered that (a) no one was willing to pay me even close to what I was earning full-time on an hourly basis, (b) once I factored in the cost of child-care (which I would still need), clothing and transportation I would be LOSING money and (c ) staying home with a sick child would likely mean getting fired.

The question of how to break through glass ceiling is useless to women who never moved beyond the pink collar — or who, like me, were forced to decide between work and family and really had no other choice than to stay home and raise the kid. I worked for 20 years and worked at home for 16. And now, I cannot even break back into the kind of entry level office job I had as a new college graduate.

My job search has resulted in little more than an endless stream of emails from employment agencies who never allow me to make it through to an interview. Nonetheless, I am subjected to a daily stream of emails with job leads that are purportedly tailored to my experience.

Most of them are for nanny positions. Because once you’ve spent several years caring for children, I guess that’s all you are good for any longer.

“The employers I work with don’t want people who have been out of work longer than two years,” one agency told me when cancelling the interview I had set up over the Internet. And that seems to be a national trend. Re-entering the workforce after taking time off to raise a family has always been a challenge. It’s even harder now.

I know a lot of women who gave up careers to raise their families, women who will face this same issue when their kids have grown. We are an underutilized national resource. We can make a solid contribution. But as of now, there are no COOs writing books and starting support networks for us.

Sandberg advises women to stop trying to have it all, and that’s where I see red. No one questions whether or not men can have a successful career and a family. Fifty years after the second wave of the women’s movement, why is this still an issue for us?

Cross-posted at MomsRising: Read the entire Lean In Carnival on their blog.