In the early 1960s, my mom landed in Nebraska as a foreign student from Taiwan. In her one suitcase were summerweight clothes, but by the time she started the academic year at University of Nebraska, a chill hung in the air and her roommates in the women’s dorm immediately held a clothing drive for my mom so her tiny frame wouldn’t freeze. Before long she got used to the snowy winters.

My dad also came to this country as a foreign student from Taiwan around the same time. He landed in Austin, Texas, where his older brother was getting a graduate degree in physics. In pre-Civil Rights Texas, he had to make sense of segregated drinking fountains and theatre seats, trying to figure out if he, an ethnic Chinese, was “black” or “white.” (An unanswerable question, really.) During the summers, in order to earn money for college, they would go north to the Catskills and work as waitstaff in the same clubs where classic Borscht Belt comedians hustled for laughs. It’s become a charming story with the gloss of nostalgia for a time gone by, but at the heart of it is the same physically taxing. long-hours-on-your-feet work that being waitstaff has always been. The lesson was: work hard in the temporary job and strive for more, or work busing dishes forever.

Not long after that, my mother and father both went to study at the University of Wisconsin at Madison, where they met and I was born.

Fast forward a few years: my mother kept up a correspondence using special airmail envelopes with her sister, brother, and mother in Taiwan. Flights back and forth were expensive, as were phone calls then. (If someone called long distance international in the middle of the night it was almost always bad news.) Children, email hadn’t even been invented yet, it was that long ago.

Before too long, my mother sponsored her nephews and nieces to come and study in the US too. They came to live with us before the school year started. They went on to get degrees in engineering, social work, library science. Even now, after their children, the next generation, have attended college and found work in environmental science or art history, my mother is regarded with deep affection as the auntie or great-auntie who gave her family opportunities to come to America and make a life. (My father also helped sponsor his brother and sisters who lived in Singapore and Taiwan.) My mother’s mother was too old to eventually come to America and my aunt died young of cancer, but my uncles managed to come once their naturalized citizen children sponsored them.

I thought of all these things when I sat in the office of a legislative aide to a California Congressman. Next to me was a woman who was born in Mexico. She told a story of how her younger sister, the pride of the family for being the first to attend college, called the police when her car was stolen.

The police arrived and after taking down some information, asked her, “Why do you need a car?”

The sister said, “I use it to go to school.”

The police officer replied, “Why do you need to go to school? You’re not going to become anything.”

I bristled. Education has been the key to generations of Americans bettering themselves, in my own family and for so many people, and for someone to crush another person’s dreams with such dismissiveness really made me angry. Yet this is how so many immigrants are treated — because English may not be their first language, or the color of their skin is one that makes people think they can say contemptible things with no repercussions.

This woman and her sister have different immigration statuses, as do most people in her family. Some siblings have documents, some are American-born, some don’t have documentation. Under California’s version of the DREAM Act, eligible students have a pathway to citizenship if they can show they’ve lived in the US and are good students, or have served in the military, or both.

But California cannot have one set of rules and Arizona another. That’s why President Obama signed an executive order making a limited version of the DREAM Act available to young college-bound undocumented immigrants.

That’s a great first step. But now we need to look at all the other situations where people have worked hard and contributed to this country and also deserve a chance to become a citizen. For every college-educated striver trying to climb the corporate ladder and lift up her family, there’s perhaps a nanny or housekeeper who helps keep the household from flying apart and is simultaneously trying to lift up her family too.

According to the Domestic Workers Alliance, women are at least half of all new applications for citizenship and over 70% come through family sponsorship. Many immigrant women today work in what’s called an informal economy, where they may not receive pay stubs or even pay checks, but are paid in cash. Or they may do important work for barter tending their own and/or the children of other immigrant women. To limit the priority categories for immigrants to holders of H-1B visas, as with the high-tech industry, unfairly slants paths to citizenship toward men and ignores the reality of women already here and trapped in a backlog of paperwork to become a citizen, or in some cases waiting 10-20 years to be reunited with their families.

“I don’t think we should be setting up an either-or proposition — even the most highly skilled immigrants, they have families, too,” said Senator Mazie Hirono, Democrat of Hawaii, referring to what she described as a false, “either-or” choice between family-based immigration adnd high-skilled immigration. “This is all about doing the kind of immigration reform that really supports the values we have in this country, and one of the values we have in this country is that family is important.”

Senator Hirono has been a champion on the need for immigrant women to be at the heart of new policy creating pathways to citizenship.

In a Huffington Post piece reflecting on her own family’s immigrant story, she writes:

When I was almost eight years old, my mother courageously brought my brother and me from Japan to Hawaii to flee my father, a compulsive gambler and alcoholic. Every immigrant has his or her own reason for coming to the United States — but all of us, like my mother, my brother, and me, come here hoping for a better life.

Family values are American values — the desire to be reunited with your loved ones or bring them with you when you venture into a new country is reflected in every picture from Ellis Island, Angel Island, all points in between, or photo taken at a citizenship swearing-in ceremony. It’s a human impulse to extend a hand of opportunity to the others in your family. 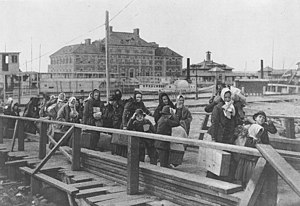 I think of my mom any time she’s surrounded by her relatives. She’s made a solid middle-class life here in America and helped a half dozen others nieces and nephews achieve their dreams. Decades after the fact, they’re still grateful and take every opportunity to shower her with affection. Isn’t that how it’s supposed to work? The American Dream gets bigger and better the more people have the chance to live it.