A Few People Booed Nancy Pelosi: What Else is New? 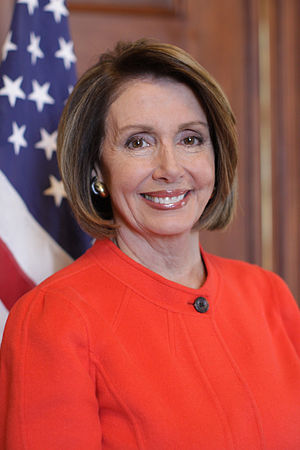 Netroots Nation ends today, and the MOMocrats in attendance will soon be home, with photos, videos and insightful takeaways from the four-day gathering of progressive activists from around the world – including some footage I took of Nancy Pelosi‘s Q&A session during yesterday’s lunch. [4:00] PM: This post has been revised with edits to the fast notes we took during Speaker Pelosi’s Q&A session yesterday.]

The House minority leader addressed a lot of issues yesterday, and had many newsworthy things to say – but the only part the mainstream media has reported upon was the place where she was booed by the segment of the audience that considers Edward Snowden a hero for disclosing details about the NSA’s secret surveillance program.

Pelosi did not attack or defend Snowden. She merely stated that talking to a reporter from The Guardian newspaper was a violation of the law. This is a fact and if you believe in the necessity of law, you also believe in due process – even when you view the violation as an act of civil disobedience.

Perhaps the reporters from right-leaning Politico have become so used to attending Republican gatherings where everyone is using the same talking points that they forget that Democrats embrace a wider variety of perspectives.

We are not a top-down party. Our discussions are messy. We question authority and encourage debate. We applaud fact and reason. Maybe I don’t agree with you now, but if you offer me a good argument, you may be able to persuade me to support your side of an issue.

I have never been to an appearance of Nancy Pelosi when she wasn’t heckled by someone who disagreed with something she said passionately enough to boo her – and yes, usually by someone on the left. She handles them really, really well. It’s almost a trademark of hers: she listens, she lets them rant a bit, and then calmly deflects the criticism and points the audience’s anger elsewhere.

And this is what she did yesterday.

I took pretty extensive fast notes of her session and will be posting a full account after I get home tomorrow. Here’s an unedited sneak peek from my fast notes of the incident in the news. (Note that these are not exact transcriptions of her words and some parts have been paraphrased):

The question asked was: Regarding the NSA, what is your response to those who feel dismayed by g he administrations and how do we balance privacy ad national security?

Our forefathers knew importance of having an effective balance between security and liberty.

She said she was tweeting a comparison of what Bush did with the warrantless surveillance program and the laws we passed that are in effect now.

It is absolutely and positively not as right to say that President Obama is a fourth term of George Bush.

Their bill, the “Protect America Act,” you know what that means, turn it upside down. It has noting to do with protecting our civil liberties.

The Bush administration’s warrantless surveillance then got caught and said it can be the Attorney General and director of national intelligence, they should decide. So then we passed the FISA amendments.

The House passed HR 1 to enact recommendations of the 9/11 commission, which included a civil liberties board. Pelosi suggested including it in the Patriot Act. President met with this board yesterday.

Pelosi noted that Edward Snowden broke the law when he revealed classified information. This is where she began getting shouts from floor – once again demonstrating how she masterfully deflects hecklers.

“I welcome the challenges people pose because those questions must be answered,” Pelosi said. Edward Snowden violated the law in releasing the documents. We must have a balance between security and privacy.”

She acknowledged the boos and catcalls from the audience but stood firm in reminding us that Snowden did break the law.

“The President will reveal in a few days the proceedings of the FISA court,” she continued. “I am thrilled that he met with the civil liberties board because that was one of the things I pushed for.”

“We should never be satisfied with a situation that lacks transparency but also have to remember that we are trying to effect that balance.

Pelosi said she understood that some feel that what Snowden did is “a heroic action.”  But when a member of the audience shouted that “the real problem is outsourcing national security,” she heartily agreed.

“Some of these guys like Admiral McConnell, who worked at Booz Allen came in and hired consultants galore and contracts and the moves in and out of this revolving door. It is astounding and wrong,” she said.

“Outsourcing itself is a problem.” she noted.

The audience applauded and the session continued.