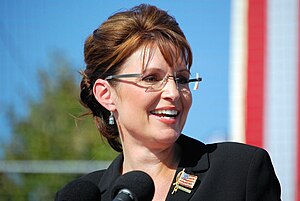 We’re determined today not to begin our news roundup with anti-abortion items, so how’s this for a lede: Sarah Palin is trying to get our attention again: This time, by threatening to run for the Senate.

Well that was short. In Texas, the House approved the draconian anti-abortion bill yesterday, and it passed 96-49 today. Now it will move on to the Senate Health and Human Services Committee. The bill cannot be considered by the full Senate until 48 hours after it is approved by Committee. This means that a Senate vote will not occur until Friday at the earliest.

While everyone was watching the Texas state legislature and the abortion bill, Rick Perry quietly vetoed a law that would have extended Lily Ledbetter protections to Texas women. As far as we’re concerned, he can’t leave office soon enough. Too bad he seems to be planning another run at the presidency. Bad for us, because he’ll continue to throw red meat to his base, which we will feel obliged to report. But also bad for him, because his views — especially on marriage equality — do not align with those of the majority of voters.

Perry isn’t the only Texas politician with questionable ideas.  Jodie Laubenberg, the author of the Texas anti-abortion bill, has a slippery definition of when life begins. Not to mention her total miscomprehension of what a rape kit is.

It’s hard to believe Teabagger-overrun North Carolina is home to the research triangle or elected pro-choice Governor Beverly Purdue as recently as last term. The pod people have taken over!

It’s one thing to disagree with someone politically. But calling all of your political enemies “terrorists” sounds an awful lot like McCarthyism. Unfortunately, there’s a lot of that going around in today’s GOP.

We’re mad as hell about the latest cynical push against healthcare reform. So are our friends at MomsRising, who are compiling a nationwide force of moms to counter the propaganda coming from the Kochs’ Americans for Prosperity. This is the kind of REAL grassroots action we need to combat the megabucks astroturf of the Kochs and their ilk.

Last night, PBS Frontline aired a remarkable Bill Moyers-produced documentary about the plight of the middle class in 21st Century America: Two American Families documents the day to day struggle of ordinary working people with shrinking paychecks and rising expenses. This is worth watching!