American students learn at a young age that the Pilgrims risked their lives to cross the ocean in the Mayflower because they were fleeing from religious persecution. They were Puritans – actually a derogatory term for their brand of extreme Christianity – and things went badly for them in England in the last half of the 16th century. The persecution they faced in England was genuine. People were killed for their beliefs. So they fled to Holland, hoping for better reception of their particular beliefs. The trouble is, the Dutch were far too tolerant and libertine for the severe Puritans.

Does any of this sound familiar?

And so, the Pilgrims landed in the New World and settled the Massachusetts Colony, where they could freely set up their little townships with the rule of religious doctrine. The earliest leaders of the colonies were often the reverends and other church leaders. The rule of law was God’s law, as interpreted by the church leaders. 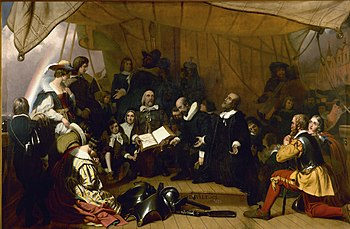 Embarkation of the Pilgrims by Robert Weir a copy is also located in the, United States Capitol rotunda, Washington, DC (Photo credit: Wikipedia)

This is all part of the history I’ve learned as a result of researching my ancestry. Like many Americans of Western European heritage, I descend from many prominent colonial settlers. Later in the 17th Century, citizenship was a matter of being recognized as a freeman – in other words, an adult male who was no longer beholden as an indentured servant to whoever had paid for his passage across the Atlantic. But in those earlier years following 1620, and admittedly later on as other areas became settled, one was not really considered a member of the community until they were proper members of the local church. One pair of my great…grandparents happened to be admitted as members 31 and 32 in their church.

None of this really sounds that bad, though, when you consider that many of these earliest colonists came over together as members of the same religious group. They all shared the same beliefs, so no one really had a problem with it.

Until other people arrived and hoped to take advantage of their religious freedom in this New World…and they were no longer the same beliefs.

I have one ancestor, whose name I’m having trouble finding right now, who was arrested and fined for consorting with Quakers. Mind you, he was not a Quaker. He belonged to the same church that most of his fellow settlers belonged to. But he had dared to speak to someone of a different faith, and had the further audacity to allow such a person to stay in his home! There was a trial, and I wish I could find the story for you, because he refused to apologize for treating his neighbors decently. I believe he ended up packing up his family and helping to found a new settlement elsewhere sometime after this.

It was this sort of thing that our Founding Fathers didn’t want happening in their new nation, 150 years after the first settlers arrived at Plymouth Rock. This sort of thing, and far worse. You know, like the Salem witch trials, where innocent men and women were executed for “cavorting with the devil.” That was also the work of the Puritans.

What Did the Founding Fathers Believe?

As for the Founding Fathers themselves, they had some diverse beliefs. George Washington, Benjamin Franklin, Thomas Jefferson, and Thomas Paine were Deists. (For those unfamiliar with Deism, it acknowledges a creator but disavows any sort of interaction between the creator and the creation. In other words, God made the world but left us to our own devices, not conversing with us through holy writings, revelations, or prayers.) Alexander Hamilton was Anglican. James Madison called himself Anglican but was more of a Deist. John Adams was a Congregationalist early on, but he converted to Unitarianism. John Jay was an Orthodox Christian.

Jefferson went so far as to take a razor blade to his copy of the Bible, removing every verse relating to the divinity of Jesus, the virgin birth, miracles, and anything else he considered a puerile superstition.

The Founding Fathers, in their own words:

“The Citizens of the United States of America have a right to applaud themselves for giving to Mankind examples of an enlarged and liberal policy: a policy worthy of imitation…It is now no more that toleration is spoken of, as if it was by the indulgence of one class of people that another enjoyed the exercise of their inherent natural rights. For happily the Government of the United States, which gives to bigotry no sanction, to persecution no assistance, requires only that they who live under its protection, should demean themselves as good citizens.”
– George Washington, in a letter to Touro Synagogue to assure the religious freedom of the Jews in the U.S.

“Have you considered that system of holy lies and pious frauds that has raged and triumphed for 1,500 years?”
“This would be the best of all possible worlds, if there were no religion in it.”
“Can a free government possibly exist with the Roman Catholic religion?”
– John Adams

“They [preachers] dread the advance of science as witches do the approach of daylight and scowl on the fatal harbinger announcing the subversions of the duperies on which they live.”
-Thomas Jefferson

“When a religion is good, I conceive it will support itself; and when it does not support itself so that its professors are obliged to call for the help of the civil power, ’tis a sign, I apprehend, of its being a bad one.”
– Benjamin Franklin

“All national institutions of churches, whether Jewish, Christian or Turkish, appear to me no other than human inventions, set up to terrify and enslave mankind, and monopolize power and profit.”
– Thomas Paine

And our modern GOP spits in the faces of our Founding Fathers, with their false piety masking their corporate greed. I consider myself a Christian, but I’m a lot like the Deists who founded our nation – believing in God and respecting the teachings and philosophies of Jesus Christ, but not wanting to impose my beliefs on anyone else, and expecting the same respect in return.

Read the words of the Founding Fathers for yourself and tell me if John Adams would approve of the Supreme Court’s decision to allow Roman Catholics to ignore federal law. Tell me if Benjamin Franklin didn’t understand that most American Christian claims of persecution are made falsely when these self-proclaimed Christians are not allowed to persecute others in the name of their religion. Tell me if George Washington and Thomas Jefferson would approve of the way modern religious zealots steamroll over science and obstruct “enlightened and liberal policy.”

The GOP politicians know that the facts are not on their side. Understanding the intent of the Founding Fathers may be tricky without context, but when you look at their letters and their speeches throughout the years, it becomes quite clear that the public is being fed conservative propaganda that is based solely on an American mythology constructed within the last two decades.